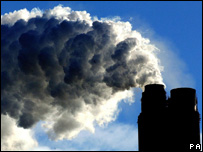 A study of the world’s power stations has shown the extent to which developed countries produce more carbon dioxide per head than emerging economies. Australians were found to be the world’s worst polluters per capita, producing five times as much carbon from generating power as China. The US came second with eight tonnes of carbon per head – 16 times more than that produced by India.The US also produced the most carbon in total, followed by China.The Carbon Monitoring for Action (Carma) website is the first global inventory of emissions and looks at 50,000 power stations.Its data was compiled by the Center for Global Development, a US think-tank. (Read More)

The former head of CSIRO’s atmospheric research unit says Australia should sign the Kyoto Protocol or be left on the sidelines at the United Nations’ climate change talks in Bali next month.

Graeme Pearman, who is now a consultant in the private sector, said Australia will be ”sitting on the sidelines” while world leaders launch serious negotiations on comprehensive post-2012 Kyoto agreement on fighting climate change.

”Frankly, I think we should sign and I don’t say that lightly,” Mr Pearman told AAP after addressing a conference of the Committee for Economic Development of Australia (CEDA) in Sydney.

Dr Pearman said he was not a fan of the Kyoto Protocol at the start, as it was not a level playing field. ”I haven’t been a strong supporter, quite honestly, of Kyoto because Kyoto was not based on any level playing field – there are all sorts of political games (that were) being played when the rules were set up,” he said. ”Now is a time to join.”