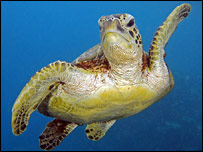 A healthy fish population could be the key to ensuring coral reefs survive the impacts of climate change, pollution, overfishing and other threats. Australian scientists found that some fish act as “lawnmowers”, keeping coral free of kelp and unwanted algae. At a briefing to parliamentarians in Canberra, they said protected areas were rebuilding fish populations in some parts of the Great Barrier Reef.

Warming seas are likely to affect the reef severely within a few decades. Pollution is also a growing problem, particularly fertilisers that wash from agricultural land into water around the reef, stimulating the growth of plants that stifle the coral. The assembled experts told parliamentarians that fish able to graze on invading plants played a vital role in the health of reef ecosystems.
“The Great Barrier Reef is still a resilient system… and herbivorous fish play a critical role in that regenerative capacity, by keeping the dead coral space free of algae, so that new juvenile coral can re-establish themselves,” said Professor Terry Hughes from James Cook University in Townsville. His research group has conducted experiments which involved building cages to keep fish away from sections of reef. They found that three times as much new coral developed in areas where the fish were present as in the caged portions.

Parrotfish in particular use their serrated jaws to scrape off incipient algae and plants. More recently, his team has also identified the rabbit fish – a brown, bland-looking species – as a potentially important harvester of seaweed. “So managing fisheries can help to maintain the reef’s resilience to future climate change,” he said. In recent years, Marine Protected Areas have been set up along the Great Barrier Reef in order to provide sanctuaries where fish and other marine creatures can grow and develop.

Dr Peter Doherty from the Australian Institute of Marine Science presented data showing that just two years of protection brought significant increases in populations of important species such as coral trout and tropical snapper. “More importantly, more eggs are being produced… nearly three times the number of eggs per unit area being produced in the surrounding territory,” he said. The eggs, he showed, travelled well outside the boundaries of the protected zones, potentially increasing fish populations in non-protected areas too.
The scientists emphasised that a comprehensive approach to reef protection would include measures to lower greenhouse gas emissions and to reduce run-off from agricultural land and human settlements along the coast. “You have got a three- to nine-fold increase in sediment loss,” said Professor Iain Gordon from the governmental research organisation CSIRO. “[There are] increases in nutrients that feed into the system, nitrates and phosphates and also new kinds of chemicals in the water that is around the reef; pesticides and herbicides, they haven’t been there before.”

Professor Ove Hoegh-Guldberg from the University of Queensland noted that unusually warm water in 1998 and 2002 had bleached and damaged coral in southern parts of the Barrier Reef. “The reef literally goes from being brown and healthy to being a stark white, and this happens with very small changes in temperature,” he said. In the past, he said, bleaching events happened only at the warm extremes of natural cycles such as El Nino; but now the overall water temperature is higher, which makes the peaks of the cycles more harmful to coral.

“Because sea temperatures are now a lot higher, they are now reaching the thresholds at which coral get into distress, and of course it is really large scale impacts.”

At high temperatures, coral polyps expel the algae which normally live with them in a symbiotic relationship, turning the reef white. The algae typically provide most of the polyp’s nutrition; without them, the polyps eventually die. Even if a bleached zone contains live polyps and carries the potential to recover when waters cool, a quick invasion of kelp, or types of algae that do not live symbiotically with coral, can make the die-off permanent – hence the protective role of plant-munchng fish.

The Great Barrier Reef is worth about six billion Australian dollars (US$5.5bn; £2.8bn) to the national economy, primarily through tourism and fishing.