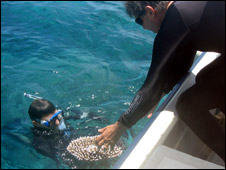 “By the light of April’s full moon on Sunday or, quite likely a night or two after, corals will be mating en masse. Along the length of the island archipelago that makes up the Republic of Palau, millions of coral colonies will simultaneously release billion upon billion of eggs and sperm into the dark waters.

An hour or so after sunset, each spawning coral will discharge showers of sex cells, packaged in orange and pink blobs. They will rise to the surface in such huge numbers that they may form oily slicks metres long.

If the sea conditions are right, spawn slicks can coalesce to be large enough to be visible from space.

Once on the surface, the packages burst open, liberating eggs and sperm for fertilisation. Countless free-swimming coral larvae then develop and three or four days later, a few will have survived long enough to make it to the sea bed. There they attach to a suitable hard surface and develop into single baby coral polyps. The next generation of corals on the reefs will be launched.

A team of marine biologists from Australia, Britain and the Philippines has come to Palau to take advantage of this wonder of nature in the cause of coral reef restoration.

The scientists are here to investigate the potential of an experimental technique known as coral seeding – in other words, collecting some of the spawn from mass mating events and using it to promote the growth of new corals on reefs in need of rescue.