SO you’re the news producer on a prime time Australian television breakfast show that’s been breathlessly covering the devastating affects of the Queensland floods and you’re looking for a new angle. How about a crack at climate change?

For television, the floods are the epitome of the story that has everything. Dramatic footage, a constantly evolving story with several drawn-out climaxes and a literally captive group of people with genuine against-all-odds tales of sadness, stoicism and bravery in the face of adversity.

In towns including Rockhampton, Emerald and Bundaberg hundreds of homes and businesses have been inundated with water. The Queensland Treasurer, Andrew Fraser, believes the clean-up bill could top $1 billion, saying the disaster has now taken on “biblical” proportions.

But back to Channel Seven’s Sunrise show, which earlier this week decided it was time for a segment which asked whether or not all this “crazy  weather” has anything to do with climate change. A fair and important question to ask but, unfortunately for the few hundred thousand viewers of this flagship show, Sunrise instead served-up an overcooked and unappetising “Greenie vs Sceptic” breakfast TV segment which was well beyond its best before date. Watch it here.

The first mistake was to make no genuine attempt to answer the question they posed. Rather than speak to experts in climate science to answer the question, they chose two people who were predisposed to present two sides of an argument – something the producers must have known. Predictably and almost instantly the segment came down to two opposing sides arguing that climate change was, or wasn’t, real. False balance in all its unedifying glory.

On one side was Nick Rowley, a climate policy consultant and one of a number of former climate change advisors to Tony Blair. There’s no doubt Rowley knows a lot about the subject, but why not ask a scientist?

But the real error was in their selection of New Zealand “weather expert” Ken Ring who has no formal training either in meteorology or climate. I suspect had they known what I’m about to tell you about Ken Ring they would have pawsed for thought before booking him.

Ken Ring was a new name to me, so I thought I should find out a little more about him. That’s when things started to get a little surreal. A chance web-hit coughed-up this little hairball. In 1998, a book was published by Penguin Books New Zealand with the title Pawmistry: How To Read Your Cat’s Paws and Ken Ring was listed as the co-author.

On the back of the book, it says

Ken Ring is a mathematician and a long-time magician, mind-reader and public speaker with a passion for the ancient discipline of palmistry. Ken stumbled upon his peculiar calling at a psychic party several years ago, where he was able to deliver a reading of a cat’s paw that proved to be uncannily accurate.

Now surely this couldn’t be the same guy Sunrise chose as a weather expert, could it? To be sure, I called Ken Ring in New Zealand to ask him and he confirmed he had indeed written that book. He claimed, however, that he had written the book “as a joke” and it had “nothing to do with my work in weather” which is comforting to learn. 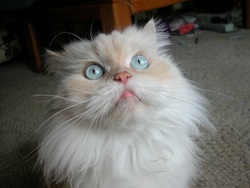 You can still buy the book on several online stores and there’s nothing which immediately would suggest that it was in any way a joke. The book has been re-printed at least once. Among other things, the book reveals that cats have seven different types of paw and those bearing the “Earth Paw” are courageous, spontaneous and should not be cornered because they become “disorientated and confused”, the latter part of which brings us neatly back to my conversation with Ken Ring. He went on

I’m not sorry I wrote it. I am willing to discuss it with people and people still ring me up and I’m happy to help them where I can. I’m pleased that they have found something in life to give them pleasure. If the book works then that’s fine. It’s a part of my life that’s finished… just like my clowning and school magicianing.

No, that’s not a misquote. Ken Ring also revealed that before being a “weather expert” he was a school teacher and also a clown and a magician. He was a school magician at the time of writing Pawmistry. I asked on what basis was he now a weather expert? How do you go from being a school magician to being an “expert” on the weather with several dozen books behind him? He explained he was making a living fishing when he “started to realise” that tides seemed to coincide with storms. He constructed a theory from that point.

Ken Ring uses moon and solar cycles to try and predict the weather and his predictions carry little to no respect among serious forecasters or climate scientists. On Sunrise, he dismissed the notion of anthropogenic climate change as having “no proof” and claimed that a solar minimum was to blame for “the cold” that we’ve been seeing in the last two years. Neither of the Sunrise hosts bothered to point out that 2010 is likely to be among our planet’s top three warmest years on the instrumental record, adding a big full-stop to the warmest ever decade.

I asked why he hadn’t bothered to mention that it’s widely known that the current flooding in Queensland has been caused primarily by the La Nina weather pattern in the southern Pacific Ocean. He said he only had a couple of minutes on Sunrise, but added

It’s got nothing to do with La Nina. That’s a name that they dreamt-up in order to identify a new anomaly in the weather to get research funding for, and to issue reports on.

Back to the Sunrise segment, where host Natalie Barr made the observation that both sides of the argument seemed compelling and  ”I think this is why people are confused… ” about climate change.

Well yes, Natalie. But the reason people are confused is because your treatment of the issues has just confused them. One of the most serious challenges facing world leaders and currently facing thousands of flood victims has been handed over to a man who once wrote a book about how to read cat’s paws.

One for the litter tray, wouldn’t you think?

For a simple and reliable explanation of La Nina in the context of the floods, watch the video on this link produced by the BBC. As far as understanding the link between single extreme weather events and climate change, that will have to wait for another post.

2 thoughts on “A Sunrise climate clanger – what has pussy got to do with climate change?”