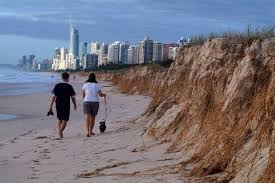 Expect more water to lap at your shores. That’s the take-home message from two studies out this week that look at the latest data on sea level rise due to climate change.

The first shows that current projections for the end of the century may seriously underestimate the rise in global sea levels. The other, on the ice sheets of Greenland and Antarctica, looks at just how much of the water stored up there has been moving into the oceans.

Both demonstrate that global warming is a real and imminent threat.

What mechanisms could lead to a rise in global sea level as climate change warms the planet?
There are four major mechanisms: the thermal expansion of oceans in a warming world; the loss of ice from the Greenland and Antarctic ice sheets; the melting of mountain glaciers and ice caps (such as those in the Himalayas); and the extraction and discharge of groundwater.

What is the latest on sea level rise?
One of the two new studies shows that last report of the Intergovernmental Panel on Climate Change (IPCC), published in 2007, vastly underestimated actual sea level rise. That’s because the IPCC’s fourth assessment report (AR4) did not include contributions from the melting of the Greenland and Antarctic ice sheets.

So, for the years 1993-2011, the IPCC estimated that sea level would rise by about 2 millimetres a year. But the satellite data from that period now tell a different story.

Stefan Rahmstorf of the Potsdam Institute for Climate Impact Research in Germany and colleagues compared IPCC AR4 projections with actual measurements and found the projections lagging behind what was happening in the real world. Global sea level has been rising at about 3.2 millimetres a year over the past two decades (Environmental Research Letters,doi:10.1088/1748-9326/7/4/044035).

Why the discrepancy?
The likely culprits are continental ice sheets. “[In IPCC models], the two big ice sheets in Greenland and Antarctica contribute nothing to future sea level rise, because they assume that the mass loss from Greenland is balanced by ice gain in Antarctica due to higher snowfall rates,” says Rahmstorf.

But satellite data show that the ice sheets are losing ice to the oceans.

If the models have not accurately reproduced what happened in recent years, it is likely that their projections for the future are not correct either. Since 2007, the IPCC has recognised this. Its initial projection of a maximum sea level rise of 60 centimetres by 2100 has been upped to include an additional 20-centimetre rise due to ice sheets melting. This effect comes from simplified models of what the ice sheets are doing, however, so even the updated projections could be off the mark and sea level rise could potentially be greater still.

So, what do the latest satellite readings tell us about ice sheets?
They tell us that the melting in Greenland is not offset by gain of ice in Antarctica. Andrew Shepherd of the University of Leeds, UK, and colleagues combined data from three independent types of satellite studies to lessen uncertainties and remove year-to-year variability.

“It’s probably now the best overall and most comprehensive estimate of what the ice sheets are doing and what they have been doing for the last 20 years,” says team member Ian Joughin of the University of Washington in Seattle.

This is a concern, says Joughin. “It shows an accelerating increase of mass loss.”

Is there a difference in how Greenland and Antarctica are reacting to global warming?
Yes. Greenland is losing the most ice, causing sea level to rise by about 0.75 millimetres per year. What’s happening in Antarctica is more nuanced. East Antarctica is gaining mass because of increased snowfall, but this is more than offset by the loss of ice from West Antarctica, particularly along the Amundsen Coast, where warm water is melting ice shelves from beneath. This is leading to thinning and speed-up of glaciers, such the Pine Island and Thwaites glaciers.

How much will the extraction of groundwater for irrigation add to the sea level?
Until now, sea level rise from the extraction of groundwater (which eventually ends up in the sea) has been countered by dams built on rivers over the last century, which hold water back on land. But the best sites for dams have now been utilised, so we can’t expect to store more water on land.

As we extract more groundwater for irrigation – a trend that could increase as climate change causes droughts – it could add up to 10 centimetres to the sea level by 2100, according to Rahmstorf. “This will become a net contribution to sea level rise in the future,” he says. “Not big, but not negligible.”