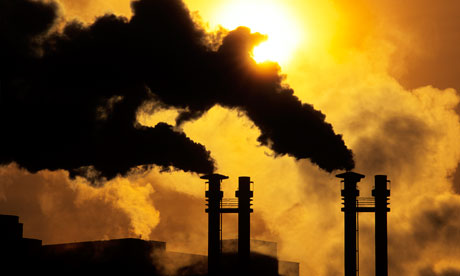 Greenhouse gas emissions increased by a record amount last year, to the highest carbon output in history, putting hopes of holding global warming to safe levels all but out of reach, according to unpublished estimates from the International Energy Agency.

The shock rise means the goal of preventing a temperature rise of more than 2 degrees Celsius – which scientists say is the threshold for potentially “dangerous climate change” – is likely to be just “a nice Utopia”, according to Fatih Birol, chief economist of the IEA. It also shows the most serious global recession for 80 years has had only a minimal effect on emissions, contrary to some predictions.

Last year, a record 30.6 gigatonnes of carbon dioxide poured into the atmosphere, mainly from burning fossil fuel – a rise of 1.6Gt on 2009, according to estimates from the IEA regarded as the gold standard for emissions data.

“I am very worried. This is the worst news on emissions,” Birol told the Guardian. “It is becoming extremely challenging to remain below 2 degrees. The prospect is getting bleaker. That is what the numbers say.”

Professor Lord Stern of the London School of Economics, the author of the influential Stern Report into the economics of climate change for the Treasury in 2006, warned that if the pattern continued, the results would be dire. “These figures indicate that [emissions] are now close to being back on a ‘business as usual’ path. According to the [Intergovernmental Panel on Climate Change’s] projections, such a path … would mean around a 50% chance of a rise in global average temperature of more than 4C by 2100,” he said.

“Such warming would disrupt the lives and livelihoods of hundreds of millions of people across the planet, leading to widespread mass migration and conflict. That is a risk any sane person would seek to drastically reduce.”

Birol said disaster could yet be averted, if governments heed the warning. “If we have bold, decisive and urgent action, very soon, we still have a chance of succeeding,” he said.

The IEA has calculated that if the world is to escape the most damaging effects of global warming, annual energy-related emissions should be no more than 32Gt by 2020. If this year’s emissions rise by as much as they did in 2010, that limit will be exceeded nine years ahead of schedule, making it all but impossible to hold warming to a manageable degree.

Emissions from energy fell slightly between 2008 and 2009, from 29.3Gt to 29Gt, due to the financial crisis. A small rise was predicted for 2010 as economies recovered, but the scale of the increase has shocked the IEA. “I was expecting a rebound, but not such a strong one,” said Birol, who is widely regarded as one of the world’s foremost experts on emissions.

John Sauven, the executive director of Greenpeace UK, said time was running out. “This news should shock the world. Yet even now politicians in each of the great powers are eyeing up extraordinary and risky ways to extract the world’s last remaining reserves of fossil fuels – even from under the melting ice of the Arctic. You don’t put out a fire with gasoline. It will now be up to us to stop them.”

Most of the rise – about three-quarters – has come from developing countries, as rapidly emerging economies have weathered the financial crisis and the recession that has gripped most of the developed world.

But he added that, while the emissions data was bad enough news, there were other factors that made it even less likely that the world would meet its greenhouse gas targets.

• About 80% of the power stations likely to be in use in 2020 are either already built or under construction, the IEA found. Most of these are fossil fuel power stations unlikely to be taken out of service early, so they will continue to pour out carbon – possibly into the mid-century. The emissions from these stations amount to about 11.2Gt, out of a total of 13.7Gt from the electricity sector. These “locked-in” emissions mean savings must be found elsewhere.

“It means the room for manoeuvre is shrinking,” warned Birol.

• Another factor that suggests emissions will continue their climb is the crisis in thenuclear power industry. Following the tsunami damage at Fukushima, Japan and Germany have called a halt to their reactor programmes, and other countries are reconsidering nuclear power.

“People may not like nuclear, but it is one of the major technologies for generating electricity without carbon dioxide,” said Birol. The gap left by scaling back the world’s nuclear ambitions is unlikely to be filled entirely by renewable energy, meaning an increased reliance on fossil fuels.

• Added to that, the United Nations-led negotiations on a new global treaty on climate change have stalled. “The significance of climate change in international policy debates is much less pronounced than it was a few years ago,” said Birol.

He urged governments to take action urgently. “This should be a wake-up call. A chance [of staying below 2 degrees] would be if we had a legally binding international agreement or major moves on clean energy technologies, energy efficiency and other technologies.”

Governments are to meet next week in Bonn for the next round of the UN talks, but little progress is expected.

Sir David King, former chief scientific adviser to the UK government, said the global emissions figures showed that the link between rising GDP and rising emissions had not been broken. “The only people who will be surprised by this are people who have not been reading the situation properly,” he said.

Forthcoming research led by Sir David will show the west has only managed to reduce emissions by relying on imports from countries such as China.

Another telling message from the IEA’s estimates is the relatively small effect that the recession – the worst since the 1930s – had on emissions. Initially, the agency had hoped the resulting reduction in emissions could be maintained, helping to give the world a “breathing space” and set countries on a low-carbon path. The new estimates suggest that opportunity may have been missed.