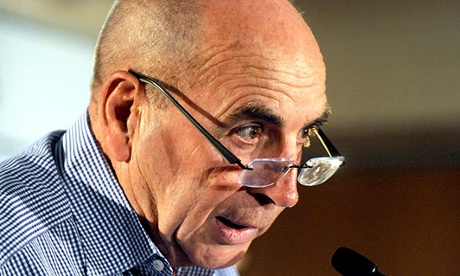 One of the country’s most experienced policy thinkers draws a brutal conclusion about Australia’s climate change debate: the “good guys” have lost the argument because they failed to contest untruths peddled by “bad guys”, including the federal government.

Bernie Fraser, the chairman of the independent climate change authority, which the Abbott government intends to abolish, is a softly spoken former governor of the reserve bank and former secretary of the federal treasury, not known for simplistic assessments of major policy discussions.

But he is clearly frustrated at what he believes has been the wilful misleading of a confused and increasingly fed-up public by politicians and industry groups who, he says, deliberately spread misinformation about climate science and the policies that might reduce Australia’s emissions.

The “bad guys” are winning because their “brazen falsehoods”, “untruths” and “misinformation” are often going unchallenged.

“The good guys are way behind and seem to be not making up ground,” he says, in an interview with Guardian Australia ahead of a speech he will make to the national press club on Thursday. “The public generally are getting bored with it all and switching off. The problem seems to be to be that the bad guys are spreading untruths and exaggerations and assertions without a lot of hard evidence and serious debate, cheered on by the big companies who make similar assertions and repeat those assertions without thorough debate.”

Asked to define the “good guys” and the “bad guys” in this analysis, he says: “The good guys are the mainstream scientific bloc and their analysis of why the planet is warming up.

“The bad guys are the mavericks, the kind we hear on the radio, who don’t accept the science and who attack the scientists, I ignore them and they deserve to be ignored … but it’s more serious when you get to people in positions of influence, in industry associations or companies, or in the government and the opposition who in some cases say they believe the science but then don’t act as if they do.

“That whole range of people I lump into the bad guy camp.”

Included in this “bad guy” category, he says, are “the present government and some of its biggest supporters, big companies and industry associations”.

“In the case of the companies and business associations, they are speaking their book and that is understandable. Companies pursue self-interest rather than community interest. The problem becomes really serious when those self-interested views tend to have disproportionate influence on the policy-makers and that is happening at the present time … particularly because there is not an effective countering of those kinds of views.”

And that brings Fraser to the Labor party.

“The Labor party has lost its way,” he says. “That is one of the reasons why the government and the big companies are getting away with blue murder on some of these things, just asserting things, because Labor is not picking them up effectively.

“I think there has been a long-term trend towards brazen false or misleading assertions and a faith that repeated brazen assertions can at least confuse things sufficiently to carry the day … Those kind of brazen campaigns have become more prominent … and there is very little institutional advocacy left for promoting the broader community interest.

“There is no one out there really presenting a coherent, informed, mature case on this … It seems to be a very important debate we should be having is going by default and those who speak loudest and most frequently, regardless of the merits of the argument, seem to be winning the day.”

In its most recent report the authority found Australia needed to treble its minimum 2020 target for greenhouse gas emissions from 5% below 2000 levels to 15% to have a “credible” role in international efforts to slow global warming.

The Abbott government has committed to meet the 5% target through its Direct Action policy – primarily a program of competitive government grants to companies and organisations seeking to reduce emissions.

Fraser repeated the authority’s view that policymakers need to use a “toolbox” of policies to reach an emissions reduction target, but he also said Ross Garnaut, an expert climate adviser to the former Labor government, had made some “good points” about the capacity of Direct Action – as so far outlined – to meet the targets.

Garnaut criticised the government’s green paper, saying it “shoots the breeze” instead of outlining a serious policy, and said Direct Action would quickly cost an unaffordable $4bn to $5bn a year. He advised the Senate to stick with a floating carbon price until the Coalition came up with a sensible alternative.

“I have been careful in questioning the likely effectiveness of Direct Action,” Fraser says. “I’ve perhaps been sceptical about it, as we understand it at this point in time.

“I thought the submission by Ross Garnaut made some pretty good points … because there are reasons for doubts about the government’s ability and willingness to address the question to the extent that I and the authority would say the science requires it to be addressed.”